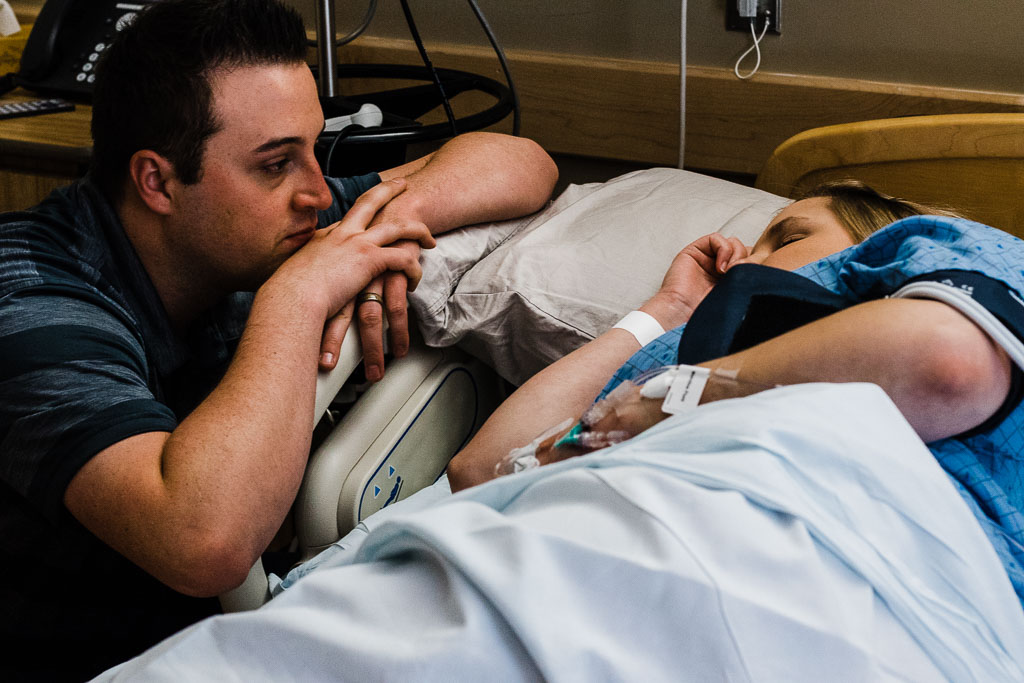 Your father and I hadn’t been married very long before he started asking for a baby, for you. I’m not going to lie; I thought he was crazy. I was still in school, he was just barely starting school and we were still just figuring out life as a married couple. But he kept asking. Every time I said “no” he’d then proceed to ask for a puppy; about a year after we got married I finally got him the puppy (Rego) hoping he’d be satisfied for a while. That lasted about a month.

There are few moments in my life that I feel have been 100% directed by the the Lord. The first was going on a mission, the second was marrying your father, and the third was you. We’d gone on a spur of the moment weekend get away to the Tebbs family ranch, we were sitting in church and your grandma was playing with the baby sitting in the row ahead of us. All of the sudden I felt like it was time. Time to start our family. 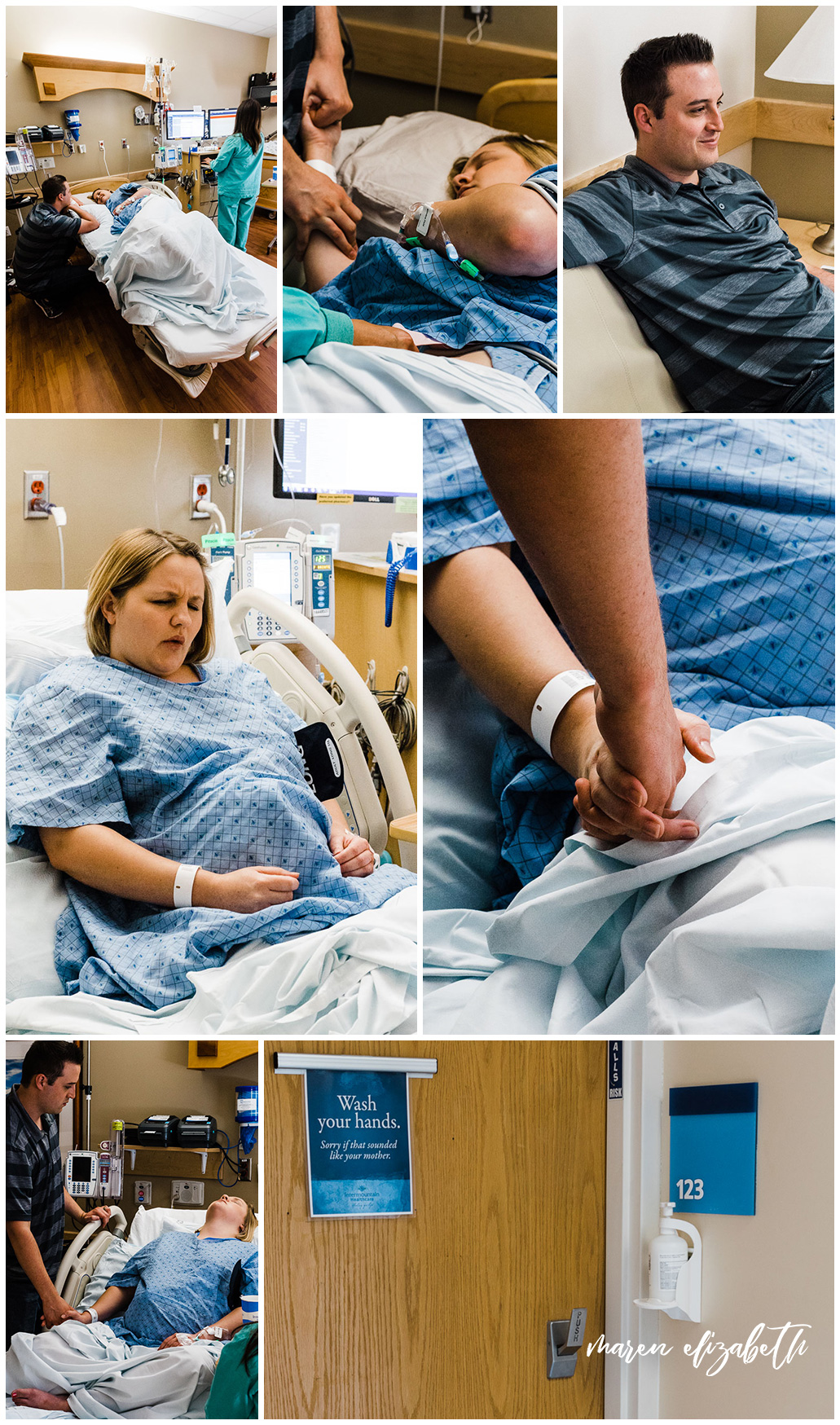 It didn’t take long; we were pregnant the very next month. It was obviously the Lord’s will for you to be born exactly when you were and not a second sooner or later.

I loved being pregnant with you. Besides some initial queasiness I felt great when I was pregnant. That is right up until your due date. Your grandma always had her babies at least a week early, at least that’s how I remember it, I didn’t even know people could go over their due date until high school. I was so sure that I was going to be like grandma and deliver you early, but the days ticked by and your due date came and went and still no contractions.

It wasn’t from lack of trying though… I walked, miles! Climbed the stairs in our four-story apartment building, and worked full eight-hour days sitting on a yoga ball. Still nothing. I felt broken, like my body didn’t know what to do. I didn’t come to terms with it until my 40-week appointment with the midwives. They made it seem normal and healthy to carry you full term. 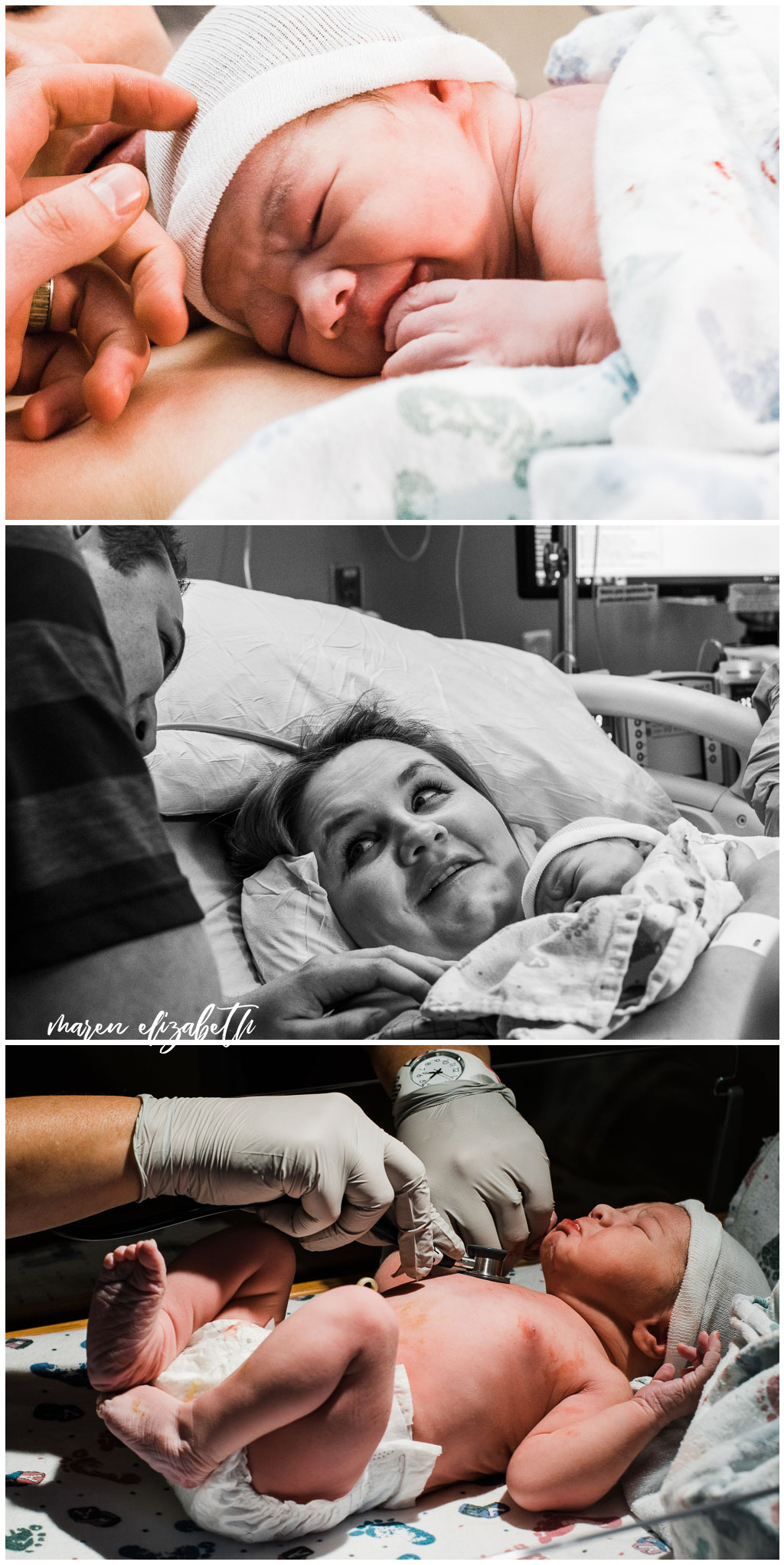 On Wednesday, your father and I went for our evening walk to let Rego stretch her legs and go to the bathroom. We hadn’t gotten very far when suddenly I felt wetness and I wondered if my water had broken. I didn’t say anything, we finished our walk and then I checked and talked to your father to see what he thought. We were both pretty sure that my water had, in fact, broken. So, we called the midwives and they told us that as long as you kept moving and I didn’t have a fever that there was no rush to get to the hospital. We decided to wait until the morning before going to the hospital, hoping that contractions would start on their own sometime that night. Alas, not the case.

I woke up at 7:00am on Thursday, excited because I was pretty sure I was going to have a baby that day. I showered, did my hair and make-up and got your father out of bed. We headed to the hospital at 8:30am. We checked in and then were taken into the triage room so they could determine whether or not my water actually had broken. I was so nervous that it hadn’t and they were going to send me home and the waiting would continue. Around 10:30 am the tests were confirmed positive. YAY! We were going to have a baby! 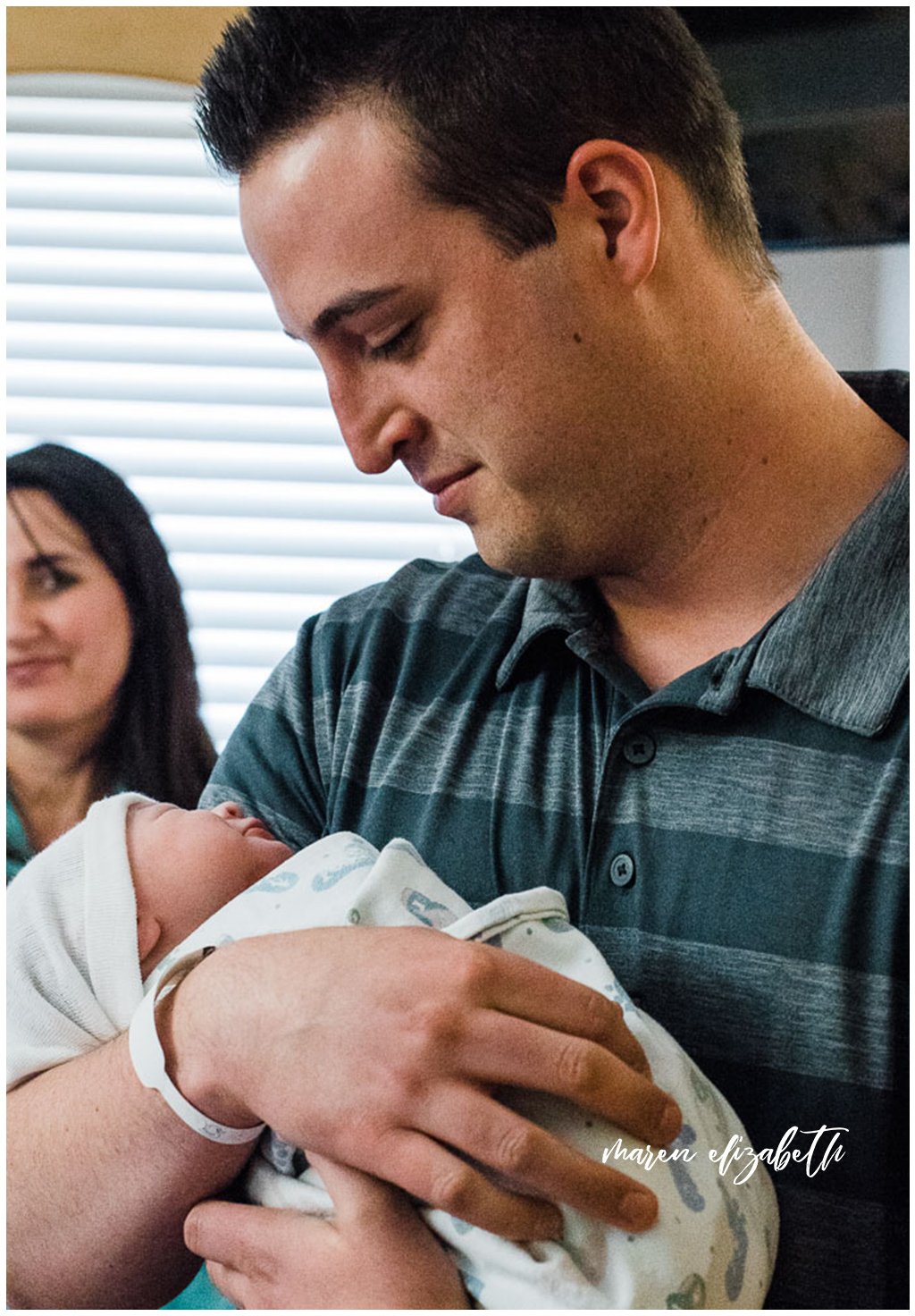 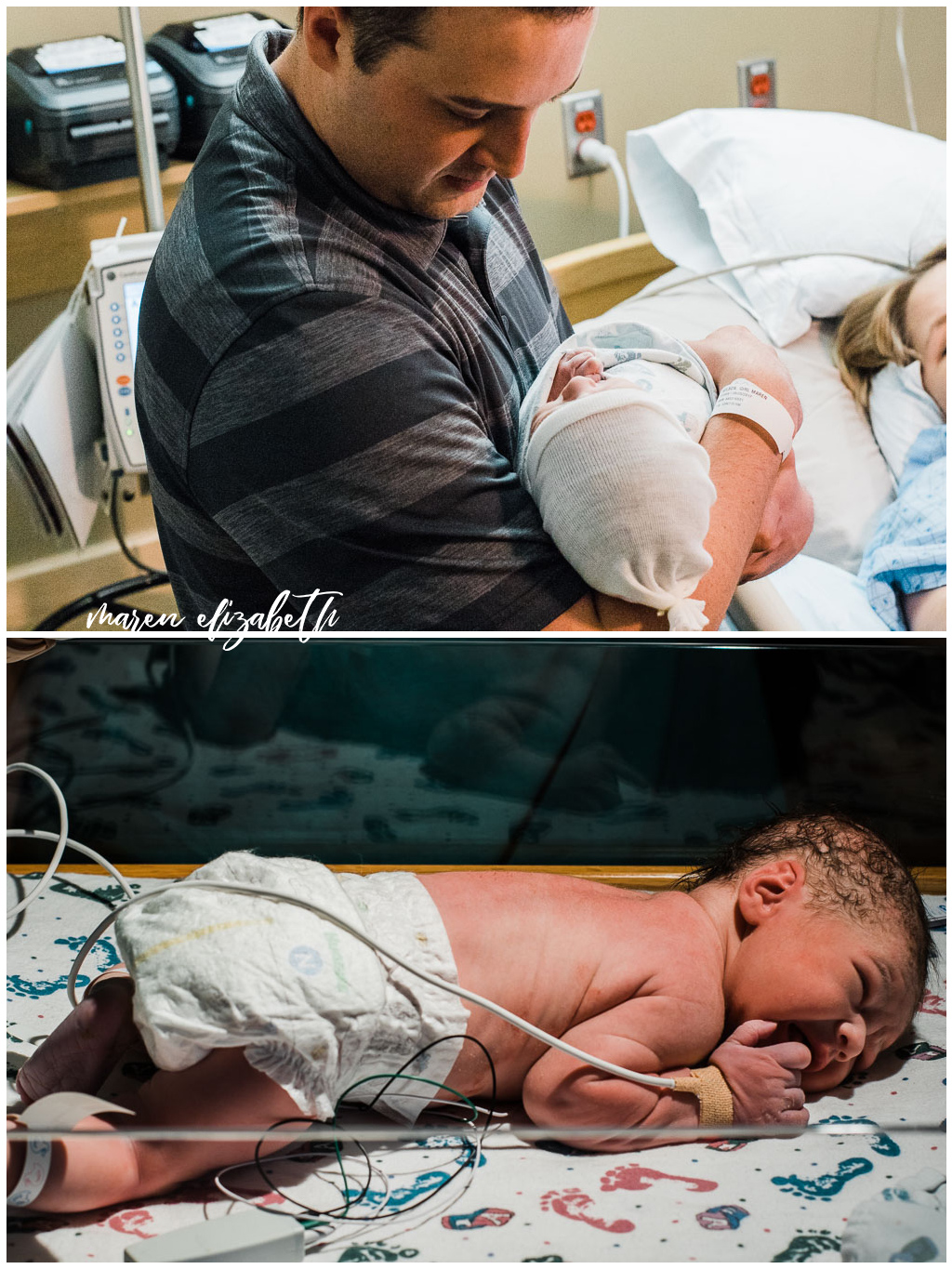 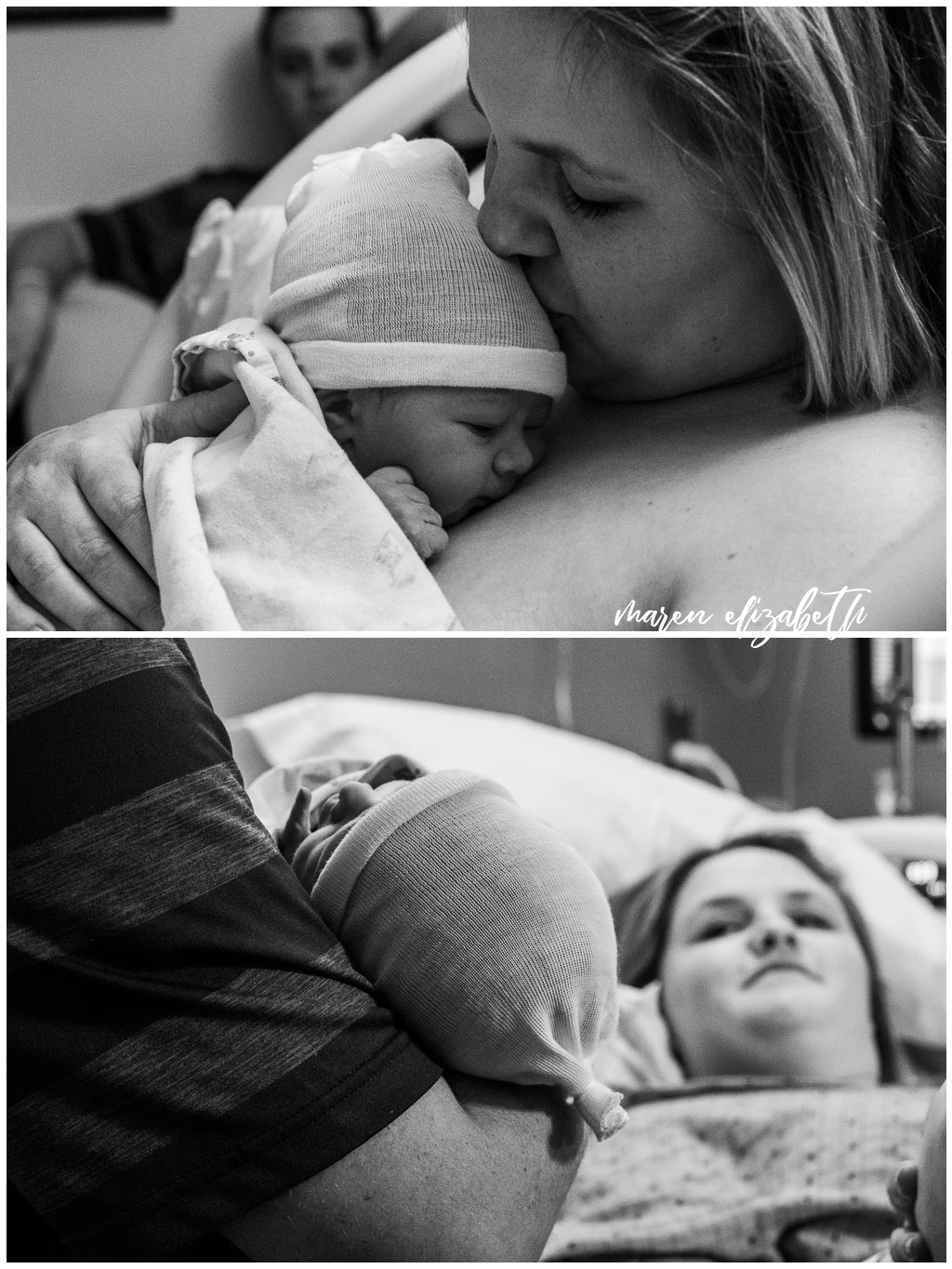 Because my water had broken at 7:00pm the night before they were anxious to get me started on Pitocin right away. I was nervous about that because I had been hoping for a natural, unmedicated delivery. I was told that Pitocin wouldn’t make labor more painful, just more consistent. Bolstered we started the journey.

By the time I was getting 12ml of Pitocin per hour contractions were coming hard and fast and they were excruciatingly painful. Everything I’d done to prepare for my natural delivery went out the window. I couldn’t relax at all and was squirming with each contraction. Because I was on Pitocin they had to have constant fetal monitoring and your heartbeat had been difficult to find, that meant I was confined to the hospital bed. Pain management 101 is keep moving.

Your father was amazing. He held my hand through each contraction and tried to help me relax. He was so supportive. But it was hard for him to see me in so much pain.

My nurse, Anette (she was an angel!), thought I was in more pain than I should have been so she checked me and got a second opinion. Not only had I not dilated further (I’d been at 3cm for several days) but they determined that you were posterior which is what was making the contractions so painful. That was the last straw, I asked for the epidural. 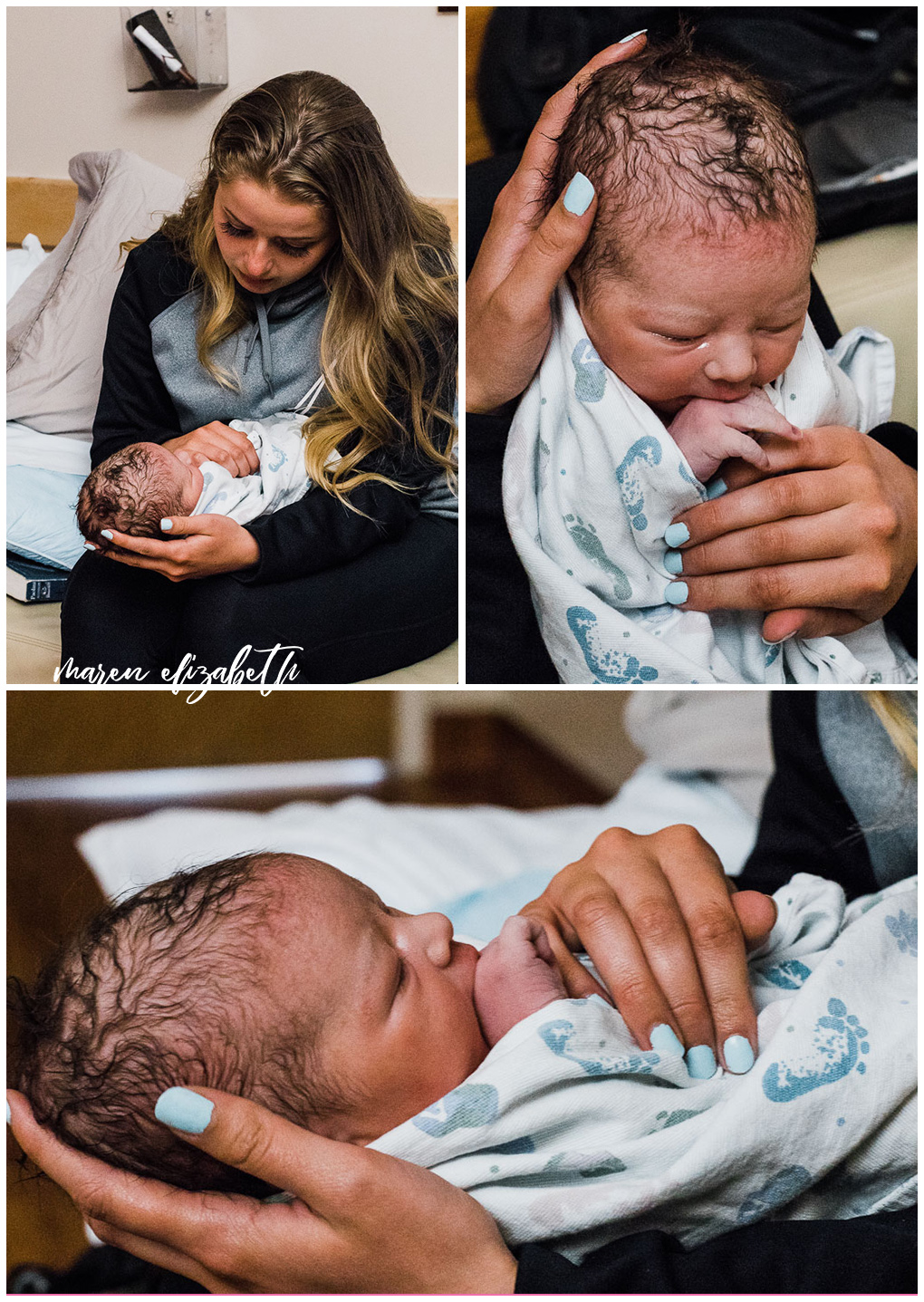 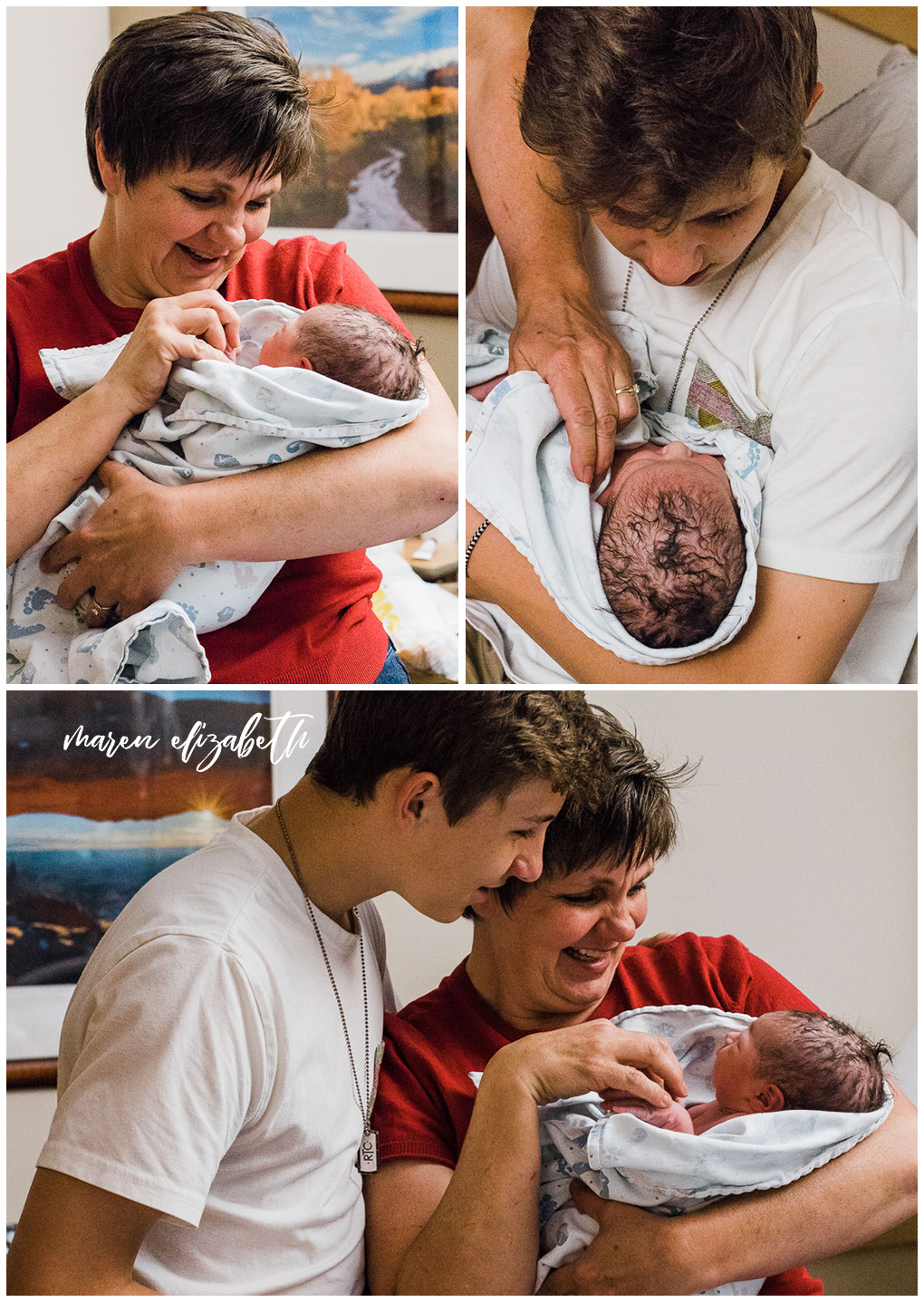 Thankfully the anesthesiologist came quickly. I got the epidural around 1pm. I went from barely keeping from crying with every contraction to laughing and smiling and talking to your father and cousin Alex. Epidurals are the best! After about an hour I laid down to rest. Around 3pm Anette checked me again to see if we were making any progress. To her surprise, I was complete, dilated to a full 10cm.

We had to wait on the midwife who was on call because she was delivering a baby at another hospital but it was okay, I wasn’t in pain anymore so I was just fine waiting. They found that the amniotic sac had resealed so there was still water between you and the birth canal. They would pop it when the midwife arrived.

Sue, the midwife showed up around 5pm. They were preparing to re-break my water when Sue reached in to check everything out. Without trying, she popped the amniotic sac and down into the birth canal you came.

About this time your Dad, thinking nothing was going to happen anytime soon, took a break to go to the bathroom. While he was in there, Sue asked me to do a few practice pushes to see how quickly you’d make your way through the birth canal. I guess you were going to move pretty quickly because they decided I was ready to push you out. Your Dad was a little dazed when he came out of the bathroom and they were preparing me to push.

Every time I pushed your heart rate dropped. It’d come back up in between contractions but they didn’t like that it was dropping so much with contractions. Rather than slow things down, Sue opted to get you out fast so we pushed, pushed, pushed, and within a half hour there you were.

They had a mirror set up so I saw your head as you were crowning and I started crying. I couldn’t believe that you were finally here! Suddenly it seemed very real. I was a mom. I was your mom. One more push and you were out. They placed you on my chest and wow! You were beautiful; 7 pounds, 5 ounces, 22 inches long, dark hair, beautiful face, perfect in every way. 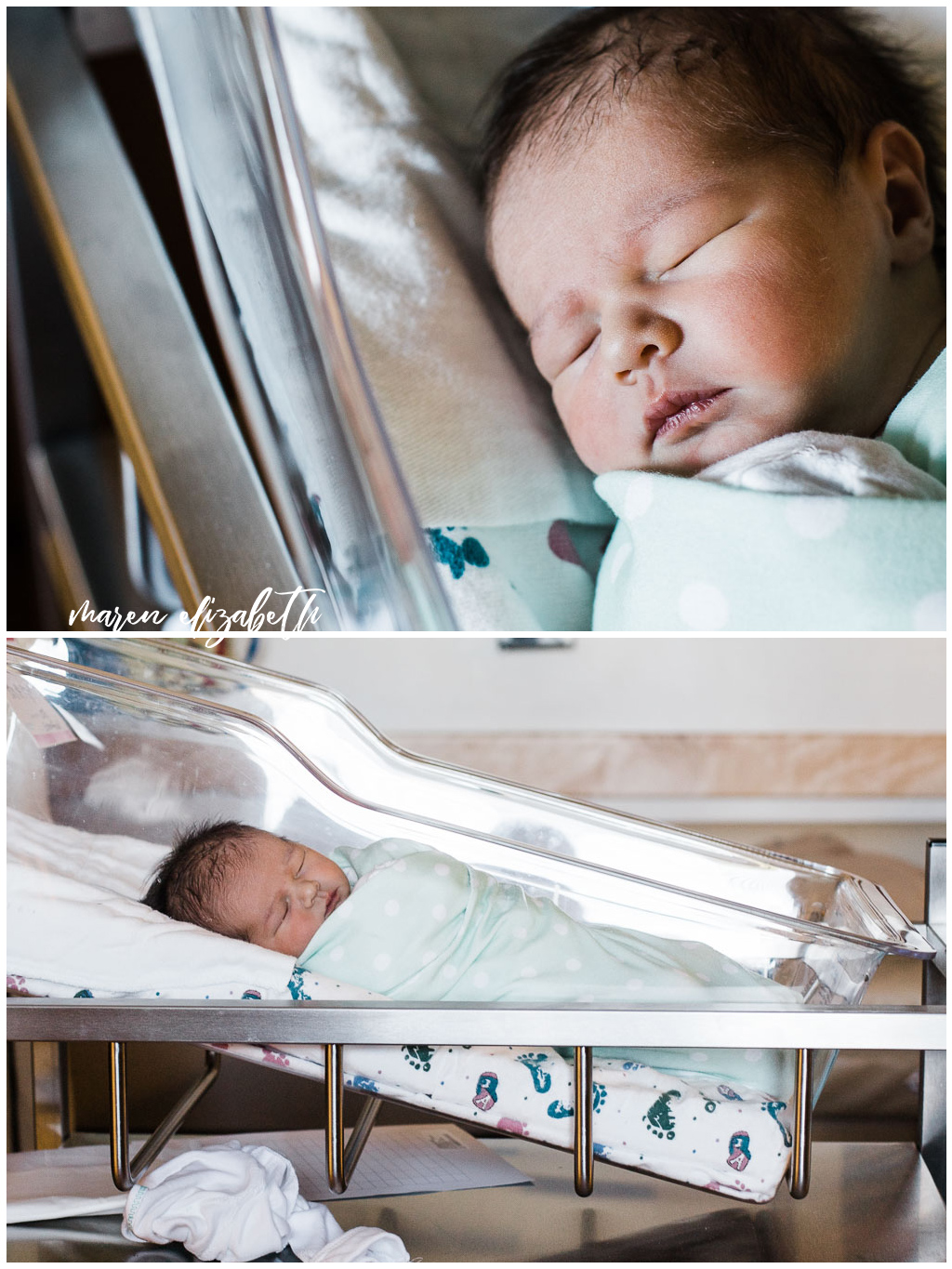 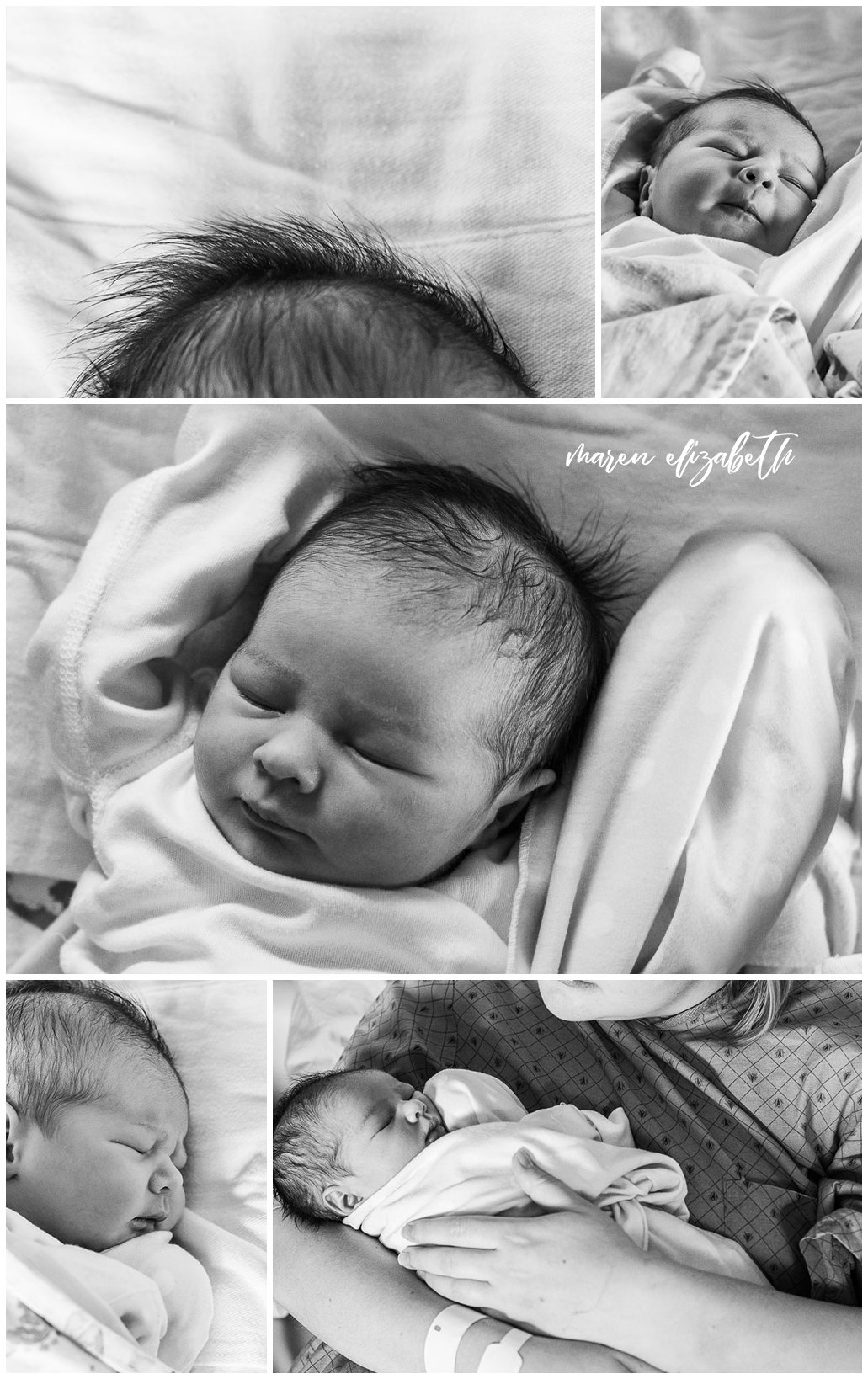 Emi, being your mom is the most terrifyingly beautiful thing that has ever happened to me. I hold you in my arms and your temporal and eternal potential screams out at me. You are a daughter of our Eternal Heavenly Father and he has entrusted you to our care; what a responsibility! I promise you that your Father and I will do everything we can to help you live up to your divine and eternal potential both in this world and through the eternities. We love you unconditionally and always will.